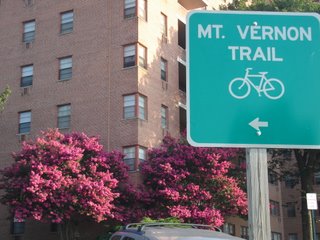 It's July in D.C., and that means the pretty crepe myrtle trees bloom. They come in various colors of white, lavender, and pink. Nice to see their pretty blossoms - sort of like a last "hurrah" for summertime. Here's a picture of some bright pink ones located off of the Mt. Vernon Trail I ride on each workday.

Also, this month, the massive Woodrow Wilson Bridge project opened up its first span of lanes, and the traffic was diverted onto it from the deteriorating 1960's old bridge. The new bridge was built taller than the old one, so that the drawbridge won't have to open as often.
The construction crews recently built a bike path detour, to avert cyclists from going under the old portion that they are currently tearing down. The detour is a bit out of the way, but in exchange, you get real close to the large beautiful arches. 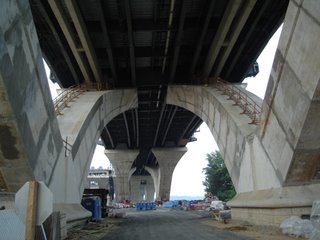 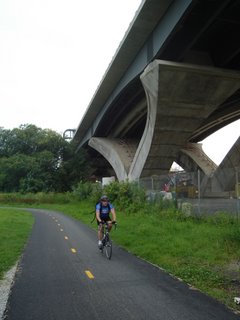 So, it's been neat to see the different phases coming along and sort of "be a part" of it!
Posted by Char at 8:03 AM 1 comment: