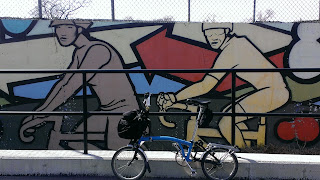 Today was fantastic weather for Bike to Work Day 2013. :) Earlier this week, we had morning temps in the 40's/50's, which felt ridiculous for mid-May. So I was glad I could leave home without a jacket or other cold-weather riding gear. :)

I was running a little behind schedule, and even though I had signed up to stop at the Bike to Work Day pit stop in Magruder Park, down the street from me, I decided to skip going there. When I went last year, there were only a handful of people at that stop, and there wasn't much excitement or activity there. With the different route I'm taking to work now, I ride on part of the Metropolitan Branch Trail, and lo and behold, there was a Pit Stop along the trail! :) I parked my bike and told the organizers there (all ladies) that I had signed up for the Hyattsville stop, but would they mind if I got my freebies at their stop. They didn't mind, so I got a nice blue Bike to Work Day shirt (my favorite color!), a new water bottle (which I needed), a patch kit, a newly issued bike trail map of DC, a granola bar and small brownie, and I signed up for a raffle for a free bike tune-up. Not bad! :) I recognized one of the lady organizers as one of the bike mechanics at the BicycleSpace store in DC. I said, "Remember me? I'm the one who came to pick up my Brompton, but there were 2 blue Bromptons there and I picked the wrong one?" She remembered me (well, she remembered my bike she said!). There had been a blue Brompton in the service area when I walked in to pick up my Brompton. I said I was there to pick up my bike, and since I had just called, I assumed they had brought my bike out and put it in the service area for pick-up. The lady mechanic rolled the bike to a back room to do one more check-over, and I noticed there was a blinking Brompton rear light....which I don't have on my bike! That's when I realized it wasn't mine afterall. She went downstairs, and retrieved my bike, which she said was different from the other because mine had a black stem...something I hadn't really paid much attention to).

Anyway, I was happy to be able to be alive and feeling good enough with my recovered arm to be able to participate in Bike to Work Day. And the beautiful weather was an added plus! :)