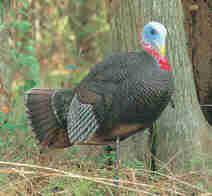 This morning, I had a nice tailwind to bring me to work. Usually in the winter, the winds are from the North, but it was blowing from the South today, which makes for a nice start to the day.

I had just finished riding over a long boardwalk that goes over a marshy area, and then there are woods to the right. A bicyclist was standing there, talking with a jogger, and they were pointing to something in the woods. So I stopped to see what they were checking out - and the cyclist said it was a Jake turkey (a male turkey)! Sure enough, I peered into the woods and there it was, calmly walking around! It was pretty big. The cyclist said he has seen several hen turkeys, but never a Jake turkey. So that was pretty neat and unusual sighting!
Posted by Char at 7:00 AM No comments: