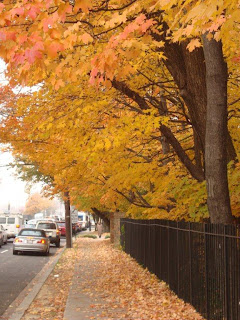 The first couple of days of my new commute, I chose to mostly ride on Rhode Island Avenue, as I needed to stop at stores on the way home. Rhode Island Avenue from my house isn't too bad to start with - it's relatively wide for bicycle travel, but then as you get about halfway to the city, the road narrows significantly (as you go under the Metro tracks) and stays that way. There's no room for me, so I hop on the sidewalk, which can be a hairy time, with pedestrians. I felt like I was in a video game of "Frogger". :)

So I studied my bicycle map for the Day 3, and chose a more western route towards Catholic University, along Michigan Avenue. That was much better, though there was traffic on Michigan, there was a sidewalk available, and no pedestrians. It's where I took this picture, with the pretty golden Fall leaves. I hang a left on First Street which takes me towards downtown and is a one-way street. When I get to R Street, there is a nice and popular bike lane that brings me to my office. It was kind of nice to, at times, find myself surrounded with other fellow commuting bicyclists, some in bike garb, but a lot just in their office clothes. I felt like I was in Copenhagen! :)

Even though the new commute is only 2 1/2 miles longer than my previous commute, I was kind of surprised that it took twice as long! That's because a city commute consists of stoplights and stop signs nearly every block. :/ I miss the quietness and speediness of the bike path I used to commute on. But riding through the city is neat in its own way. There are shops along the way and people to watch. In fact, when I was waiting at a light, I turned to see a lady from my office walking by, so we stopped to chat briefly. She has biked to work in the past, but lately has decided to take the bus so that she could have some "reading time". :) I challenged her to see who would get to the office first...but she smiled and said she knew I would win. :)

On my commute home, I ride on Q Street, which has a nice bike lane to enjoy. Also, as I get closer to home, I veer off on Monroe Street, which parallels Michigan, but has less traffic. This morning, I thought I would try riding Monroe Street towards work and realized it wasn't as fun because it has a LONG uphill that took my breath away. Much better to save Monroe Street for my ride home, when I could enjoy a DOWNHILL. :)
Posted by Char at 10:02 AM 2 comments: 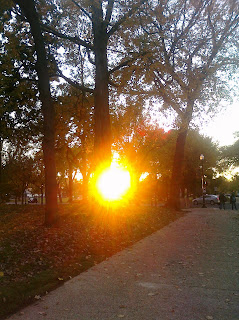 Last night when I was riding home out of the city, the sun was just about to drop below the horizon. The golden rays bathed the trees and ground, I just had to take a picture. This weekend, Daylight Savings Time comes to an end, and my evening commute on Monday will be in the dark. It always seems to affect drivers on the first dark commute. It's like the lights have been turned off and they are disoriented.

I will be moving over the weekend to my new residence in Maryland (sharing a house), so I too, will be a little disoriented on Monday night, not knowing the streets for the commute very well. I'll just take it slow and easy, til I get used to the streets, traffic patterns, etc. In a way, I will miss the evening commute in sunshine...but commuting in the dark is fun in its own way too. It's like going undercover, you're cloaked in the darkness. I bought new batteries for my lighted vest so that I'll be seen easily. I had to get a new headlight a few months ago to replace my previous one. It's bright, but it's only mounted on my handlebars vs. my helmet, which I don't like as much. I may need to get a helmet-mounted one, we'll see. Since I'm not familiar with the route/streets for the new commute, it's important to be able to shine the light on the street signs so I know where I'm going. :)

A funny thing happened the other night when I was going to pick up one of my bikes from Hudson Trail Outfitters that needed repair. The guy at the register looked at me and asked if I had a Bike Friday. :) I said I do, and he said he remembers talking to me once on the the trail. He recounted the meeting - he was heading to the C&O Canal to meet a friend to go camping for the weekend. When he said that, I remembered him right away - because he had had panniers on his bike and I had stopped to talk to him about where he was going and what he was doing. It's funny because this happened maybe 3 or more years ago! He said he never forgets a face. Funny that he would remember me and our encounter after so long! I didn't recognize him, but definitely remembered meeting him. :)

Well, stay tuned to see how the new commute goes!
Posted by Char at 8:55 AM 1 comment: