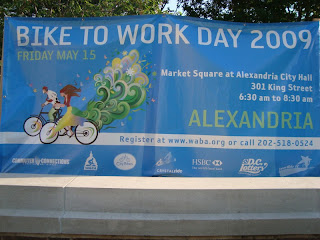 Last Friday was Bike to Work Day, so I left home a bit earlier to be able to spend some time at the pit-stop in Old Town, Alexandria. I rode my Bike Friday folding bike, and also had the trailer suitcase hitched to my bike because I was bringing in a stained glass panel I had made, for a silent auction that weekend. I propped my bike and suitcase up against a wall, and went to take a look around at the various vendor booths. There were a good amount of bike commuters there, milling about, having some of the free bagels, coffee, apples, and energy bars. There was music and raffle prizes being given away. There was a vendor booth for a new pedicab service that's starting up in Alexandria - offering both transporting people, and also delivering groceries, which is nice. I've taken a few pedicab rides in the past and they are great fun. :) They could use more pedicabs in D.C. around the Mall area, because tourists walk a TON, and it's pretty tiring. Pedicabs are a nice alternative compared to a taxicab. There was a local bike shop who had a repair stand set up to do any minor adjustments to your bike. 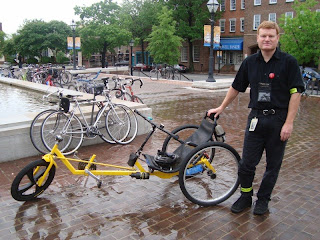 It was fun to see the cool jerseys people wore and the different kinds of bikes people rode. I talked to one guy who was there with his homemade recumbent trike. He said he made the bike from plans he bought on the internet, and the total cost of the recumbent was about $300! He didn't understand why recumbent trikes have to cost so much (they usually go for about $2,000-$3,000). Of course, his bike was steel, not aluminum - so it's a lot heavier. But it was still impressive to see that he had built it himself. :)