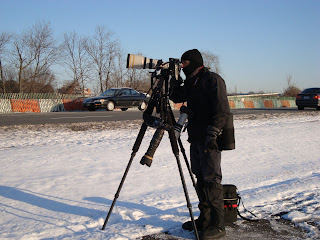 Well, March arrived, and with it yesterday, we got 5 1/2 inches of snow. We haven't seen that much around here in 6 years. Yesterday, I took the subway to work, but decided to ride today. I left about 25 minutes early, anticipating difficult conditions on the bike path. It normally takes me an hour and 15 minutes - - today it took 2 hours, so I got quite the work-out. But, in a way, it was a fun - sort of like an obstacle course. One neat thing was that I stopped to talk to a photographer guy who is out there all the time. He has two huge cameras with long lenses, and I found out he works for the National Park Service. He takes pictures of the bald eagle that is nesting near the bike path. I asked if I could take a look through his camera on the tripod, and he agreed. I saw the head of the bald eagle sticking up out of the nest. So we chatted a bit before I continued on. You can take a look at some photos of the eagles at:
http://www.flickr.com/photos/74104660@N00/sets/72157613509156390/

I took roads wherever I could, so I could make up some time that way. The path was a mix of various conditions - a few blacktop areas, but mostly snow/ice encrusted. Sometimes I had to get off and walk, as it was just too chunky and difficult to ride. The wind chill was about 1 degree, I think, but I was working hard and didn't notice the cold!
Posted by Char at 7:35 AM 4 comments: