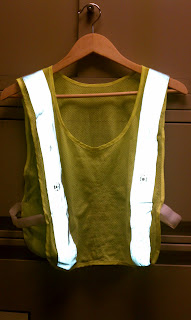 I bought this reflective vest at a bicycle show in Philadelphia a couple years ago. It was $30, a little expensive, but I thought it would be worth it. It has LED lights that are battery operated. The lights blink brightly - - 2 in the front and 4 in the back. I thought that was a great idea and it was VERY eye-catching. Since my new commute is all city riding, this vest is excellent. And other bicyclists and pedestrians think so too, because I've had a handful of people comment that they think the vest is really neat. :) When I was taking the picture of the vest, I turned the lights on to see if it might make a better picture. I saw that, unfortunately, a couple of the lights are not working. :/ Not sure if these can be fixed or not - I don't think so. So I went online to see if I could find the same vest or something similar, and I did, so I'll be ordering it soon. The vest isn't the same one I have (and I don't have the manufacturer's name - rats!), but the one I found is probably better, because it has 16(!) lights on it! So I'll look like a Christmas tree! All the better to be seen! :) And the cost of the vest is about $10 less, so that's nice.

The past two nights, I went to someone's apartment in D.C. to look at some furniture I was considering buying. I wasn't sure how long it would take me to bike there, so I decided on the first try, to use the bike rack on the bus option, thinking this would be probably the faster option. I had trouble locating the exact bus stop (I hadn't studied my bus map very well). I finally found it and waited...and waited...and waited. I think the bus doesn't run that often (every 20 min.) and there was a lot of traffic. While I was waiting, bicycle after bicycle went by, as they chugged up the hill next to the bus stop. Shoot, I could have probably ridden faster, I thought.

The next night, when I had to return to that apartment again, I decided I would bicycle there - it's only 3.5 miles - but there are some long hills and lots of traffic, as the route is on a busy commuter street. I was surprised to get to the location about 20 minutes FASTER than the bus. I know this because that certain bus number did not pass me the whole way. :) I think if it had been raining, I would have taken the bus, but since the weather was nice, riding was fine. I got the exercise up the hill, and it saved me the bus fare. :) So it was a good experiment to try. :) Though there was a lot of traffic, I don't get slowed down by it since I can pass all the cars stuck at the lights and in the traffic jams. :)
Posted by Char at 10:57 AM 4 comments: