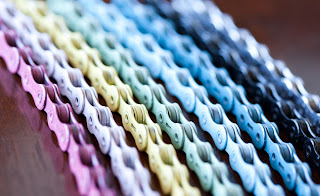 Last night when I got off work, I decided to go to the bike shop to have them take a look at my rear derailleur and gears, because my chain was jumping around when I got in the upper gears. It's a handy shop because part of it is a bike shop, and the other part is a hardware store. I needed to pick up some primer for the iron railing on my porch that I am repainting, so it's nice to get two things done at one stop. :) My road bike is just recently back on the road a couple of weeks after I put on a new cassette and chain. Evidently I didn't get the cassette on quite right (I supposedly missed getting the splines correct) and that's why I had the gear problem. So he took it off and fiddled with it and made some adjustments and after paying $5.00 for that along with the primer, I headed out.

Except two blocks from the shop, as I reached the higher gearing, the problem was still there. :( So I turned around and went back to the shop. The guy wasn't real happy to see me back, and he donned his helmet and gloves and took my bike for a test ride. Maybe he thought I was imagining the problem....but he was back in a few minutes and agreed that it wasn't working good. This time he unscrewed the rear derailleur and made some more adjustments. I took it for a quick test run, and it seemed good, and I paid an additional $7.00 for that adjustment.

Okay, now I get about 10 blocks away, and as I pull up to the light, my chain makes a noise and feels like it fell off the chain ring. I look down, and was surprised to see that my chain actually had come APART!! It was all wrapped up in the cassette! In all my years of biking, I have never had a chain break. I have put on new bike chains in the past number of years on my various bikes and never have had this happen. So, I got off and unwound the chain and put it in a side pocket of my bike bag. I knew of another bike store about 7 blocks away that I could get to, and hopefully they would still be open (it was almost 7 p.m. now). I put one leg on the side of the bike and used the bike like a push scooter and pushed my other leg off to get on down the sidewalk.

I got to the bike store and asked if they could put my chain back on. I don't carry a chain tool with me - but maybe it'd be a good thing to have along... The guy put a new master chain link on the chain and installed it, for $17.00. A little expensive, but time is money, I know. Now it was 7:10 p.m., and I didn't have my riding lights with me, and it gets dark about 7:30. I was about 5 blocks from a Metro station, so I rode there to take the subway home before it got dark. It was nice that the train came within a minute after I got to the platform. :) Timing is everything. :)

Regarding chains, I've thought about bikes that have the carbon belts instead of chains. I don't think that carbon belts would break, and I think the maintenance would be a lot less. However, I just checked the price of a carbon belt and was a bit shocked to see it's $54.00!! They say a carbon belt will last about 3 years. I usually put a new chain on my bikes every year or so. I get a good quality chain, that costs about $20. So three chains in 3 years is about the same price as a carbon belt. So I think I'll stick with a regular chain.

Once in a while (like maybe once a year or every other year), I have these long commutes, due to mechanical issues or weather conditions. Some people might think these kinds of delays are a big hassle. But I think that people who drive cars to work or take mass transit encounter MANY more delays than this. Also, car repairs are LOTS more expensive than the $30 I spent on my bike repairs. :) I'm glad to have the bike shops nearby to help and for Metro in getting me home before dark. :)
Posted by Char at 6:19 AM 2 comments: