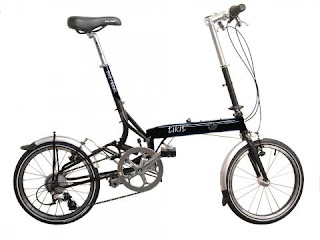 Last Friday night, I received my new Bike Friday Tikit bicycle. It's the fastest folding bike made....folding in about 5-10 seconds. This bike is different from my other Bike Friday bicycle, in that the wheels are smaller (16" vs. 20") and it folds fast without having to take the bike apart. I bought it mainly because, since I'm car-free, it would come in real handy if I wanted to take Greyhound or Amtrak to other places. :)

I rode it to work yesterday. I noticed the gears skipped a little bit - so it needs some adjustment...but other than that, it rode fine. I got to work, folding the bike up and brought it up to my desk, as I wanted to show various people in the office my new bike. I was showing a partner in the office (who is a biker), and he straddled the bike, and then to my big surprise, TOOK OFF DOWN THE HALLWAY -- and kept going around the WHOLE FLOOR!!! You should have seen people's faces as he went pedaling by!! It was priceless!! He got back to my desk with the biggest smile on his face! :) He said that it was definitely a cool bike. :)

I brought it to another floor, to show other friends, and another partner came out of his office to take a look. I don't know the partner - but just had heard of his name. He said, "That's a neat bike..." - straddling the bike and then HE TOOK OFF DOWN THE HALL AND AROUND THE WHOLE FLOOR!! :) I don't think he's a biker - so he sort of wobbled his way down, but managed to make it all the way around. Secretaries were so surprised, they grabbed their phones to take pictures and video! :) Pretty wild! :)

I showed it to yet another partner (who is probably his his late 60's) - and he hopped on the Tikit too and rode it, but just to the end of the hallway (almost wiping out as he tried to turn the corner!). Anyway, everyone I showed it to (which was probably about 20 people) thought it was a very cool bike and were amazed that it could fold so fast and so compactly. :) Maybe it'll inspire some to buy a bike (like this one or otherwise). :)

After work, I rode to meet a friend for dinner. I folded the bike up and brought it into the restaurant and put it next to our booth. Fortunately, it was a roomy restaurant, and tables aren't close to each other like some restaurants. One worker did stop by to ask what the pile of metal was sitting by our booth - I told him it was a folding bike. :) He was surprised to hear that. :) It did feel kind of funny rolling my bike in, and I tried to act like it was just a normal, everyday occurrence. :)

After dinner, as I was outside, putting on my riding gear, a couple noticed my Tikit and stopped to chat - the guy recognized it was a folding bike. As I got a few blocks down the way, some bicyclists stopped at the light near me and said, "Hey, Bike Friday Tikit!!" :) They said they had Bike Fridays at home also. :)

So the Tikit got QUITE the show yesterday, for sure!! :)