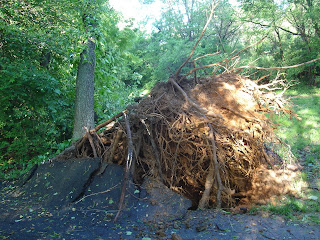 Recently, over a period of 4 days, we had A LOT of rain - probably about 8" in Alexandria! When I rode in on Monday, there were a few trees that had come down across the path or uprooted near it - like the picture above. It took the edge of the path as well. Fortunately, the path is maintained by the National Park Service, since it runs alongside the George Washington Memorial Parkway. So, thankfully, the Park Service sends out workers to cut up trees and branches that block the path. There are a lot of people that use the path, so we greatly appreciate this service! :)

Back in 2003, Hurricane Isabel came to town, and the storm surge from the Potomac River flooded various parts of the path, including pushing up a certain long boardwalk that is near Belle Haven. When I rode into work after the storm, and came to the end of this boardwalk, I was pretty surprised to see the water had pushed up the boardwalk about 5 feet from the ground! I had to stop and jump off the boardwalk, and hoist my bike down! Wish I had my camera that day to capture the boardwalk in that condition! The Park Service came and pounded the boardwalk back into place.

Right after this boardwalk, for years, the waters often flooded over the path, when there were heavy rains. It was fairly deep, though I could get through it slowly on my bike, but joggers had to walk way around it to get by. Finally the Park Service decided to re-route the bike path and make it run closer to the Parkway and built up the land slightly to keep the path away from any flooding. This has worked great, and again, we appreciate it. Thank you, Park Service!

One other area that was re-done was near National Airport. Years ago, the path used to cross a busy exit from the airport. There had been a number of cyclists/pedestrians hit by cars. So they built a nice long overpass, and now we sail over the traffic safely. I am lucky to have such a nice route to work, and am always thankful for it. I know a lady bike commuter who commutes about the same miles as I do, but her commute is along a VERY busy road, lots of lights and traffic. Her commute is much more difficult than mine, for sure, and I admire her for it.
Posted by Char at 6:39 AM No comments: