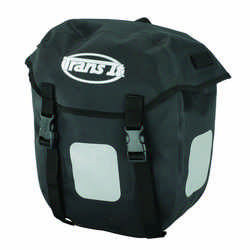 I was biking to work yesterday, and had just started riding up onto the 14th Street Bridge, when I looked ahead and saw a black pannier on the sidewalk. It must have popped off someone's bike rack. I stopped and picked it up and took a peek inside. It looked like the owner was a guy - there was a towel, anti-perspirant, and a guy's belt. So I put it on my rack and brought it to work. When I got to the garage, I took a closer peek and saw there was a wallet inside. So when I got to my desk, I checked through the wallet to hopefully see some identification and/or a telephone number somewhere. The driver's license showed he lived in Alexandria, so we had that in common. :) I found a State Farm Insurance card, with a phone number listed. I wasn't sure if it'd be a home number for this guy or to State Farm. Turns out it was to State Farm - so I told them I found this guy's wallet and bag, and could they contact him as soon as possible, and I gave them my name and number. I knew that the guy would already be starting the process of quickly cancelling cards, etc., and I hoped I would catch him before he got too far. We all know how that goes.

Wihtin a few minutes he called and told me he loved me that I had found his wallet. :) He had been telling his wife that he had been needing to replace this pannier bag because it wasn't staying on his rack very well and that it was too loose. He works not too far from me in downtown, so he said he'd bike over (since he didn't have money to take a cab!). So within a half hour, I met him in my office lobby and he was happy to get his pannier. :) He said, "You must not have been too far behind me on the bridge, because I got to work just about 10 minutes before you, and had realized I didn't have my bag." So, I was happy to be able to return his pannier to him and that he hadn't been too inconvenience. He said he had just cancelled the Smart Trip (subway) card, and was getting ready to cancel his credit cards when State Farm had called. He offered me a reward - and of course, I declined, but did tell him to go buy a new pannier bike bag! :)

A similar situation happened another time when I was biking into work. I had just started biking through Georgetown, and I looked ahead and saw a lady's purse on the street. I brought it to work with me and called the phone number that I found inside. I had reached the lady's husband who worked in Bethesda. At first, he couldn't understand why I had his wife's purse. I told him I was a bicycle commuter and had found her purse in the street in Georgetown. He said his wife had taken a cab that morning to a breakfast on Capitol Hill, and perhaps she dropped her purse in the haste of getting into the cab. He said she would be traveling to Charlottesville afterwards, so she'd definitely would need her purse. So he was quite happy to come and get it after his morning meeting, to then bring to his wife before she left town.

Sure wish whoever had found MY purse in a parking lot near home a couple years ago, would have returned it to me... :( It was soon after Christmas, and I had just gone to the bank to get $300 cash...plus I had Christmas gift cards in there. So, someone definitely had a fun after-Christmas shopping time on my account! :(

But at least I was able to return these people's belongings, and make their day a better one. :)
Posted by Char at 2:14 PM 4 comments: