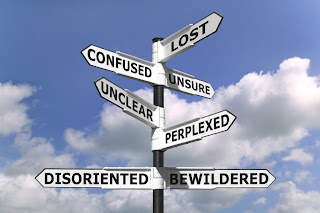 I was on my way home last night from work, and just came alongside the Air Force Memorial driveway. A car had pulled in and was turning around. The guard at the guardhouse was standing there and approached me and asked me to stop. I thought it was maybe so the person in the car could back up to then merge onto Columbia Pike. Instead, he asked me if I knew the area and if I could help the lady in the car, who was lost and trying to get to the George Washington Parkway. We came up to her window and she was on her cell phone. She evidently was trying to get to the Holiday Inn in Old Town Alexandria, which was about 5 miles away. Her cell phone battery was pretty low and the directions on her phone's GPS were confusing her. I know the area pretty well, though trying to verbally direct her to get to either the parkway or even Route 1 from where we were, would probably get her even more lost. I was riding my Brompton, and I said that if she didn't mind, I could put my bike in her car and then hop in and show her where the hotel was, and then I could bike back. She was fine with that, so I folded my bike and put it in her trunk. The guard was standing nearby and said "I knew you could help her. And hey, what a cool bike!" :)

We zipped off towards Route 1, taking side roads to try and avoid a lot of the traffic. She was from Lebanon, but has lived in the area about 5 years. I know the roads and signs can be confusing in the area. She was driving a nice BMW, which, she said, is a Zipcar! I lit up and said I was a Zipcar member too, and we talked about the various nice Zipcars available. :) We chatted about other things we had in common - she worked a block from my office; she was having dinner tonight with her boyfriend at a restaurant where I had just eaten at last weekend; she was in L.A. a couple weeks ago, and I was headed there this week, etc. So, we pulled up at the hotel and her boyfriend in Army fatigues met us, happy to see her. She offered to take me back home, which was crazy - - I said I would just bike home, no problem. I wished them a great dinner and got my bike ready for night-time riding. I was right near a friend's place and called her to see if she might be free for dinner, but she was already eating with a friend. So I headed towards home, thinking I'd stop at the pet store to get a couple things I needed. I remembered I didn't have my lock...but then I thought, no problem, I'll just fold my Brompton and put it in the cart and bring it into the store. I had seen videos of other Brompton and folding bikes do that, but I hadn't before. Now was the perfect time for it. :) It was a nice night out for a ride and I enjoyed the fresh air.

So, the Brompton came in handy in a couple of ways - being able to fold it into her car trunk, and then folding it to bring it into the store to shop. I got to meet a nice person and helped her out, and run an errand on the way home. A nice little diversion from the regular commute! :)
Posted by Char at 6:37 AM 3 comments: 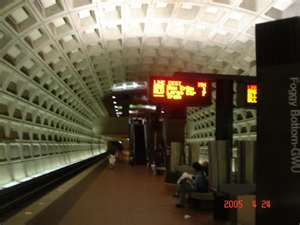 Last night, I was catching the Metro back home. I recently downloaded the Metro tool of the "Next Arrival Time" for trains...but my cell phone battery was low and I had powered down my phone earlier in the day. So I couldn't check to see when the next train was. I was about halfway up the escalator when I heard a train approaching...I didn't know what direction it was coming from/going to, but it kind of sounded like my side of the tracks, so I picked up my bike (which takes a bit of muscle and balance) and walked quickly up the escalator. When I got to the top, sure enough, it WAS my side, and I had enough time to take my place at the doors to hop on. :) I was real happy to not have a delay in waiting for a train, for a change. :)

On another note, I recently have been looking into buying a house, possibly in Maryland. One requirement that I would need is for the house to be within striking distance of the Metro or a bus line. My brother suggested that if I were to get a cheap little car, that I could buy something in a nice area, with just a little commute to a nearby Metro station. I told him that parking for Metro is expensive, in addition to the long ride on the subway. Not to even mention the traffic getting TO the station. The DC area just became #1 for traffic in the U.S., surpassing L.A. No thanks, I'll take bike commuting anyday. :) However, in looking to live in a new residence, a SAFE COMMUTE is an issue. The homes that fit my budget are kind of in "sketchy areas". :/ This makes me nervous because what good is being a homeowner, if you don't MAKE it home from your bike commute? In a way, it's good to not own a car in areas like this because I read there are car thefts. But then, in not having a car, I have to be concerned with the neighborhoods that I pass through on the commute, since I come and go in the dark and/or possibly late hours (on the weekends). So, it's a little bit of a puzzle to have to figure out...and, if it's meant to be, then it will happen.
Posted by Char at 10:03 AM 5 comments: