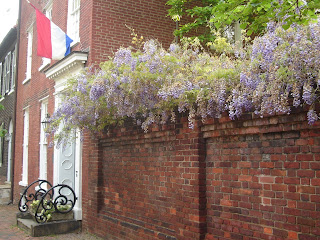 I was riding to work last week, down Royal Street in Old Town Alexandria. There are some nice historic houses dating back to the late 1700's and 1800's on Royal Street. There are lovely brick houses, including this one, that has overflowing wisteria along its walls.

I was reading online today about Alexandria - that it's actually 50 years older than Washington, D.C., and is America's most historic communities. In fact, in 1796, a visitor, the Duc de La Rochfoucauld Liancourt, commented that: "Alexandria is beyond all comparison the handsomest town in Virginia--indeed is among the finest in the United States." I always enjoy riding through Old Town. There are a few cobble-stoned streets - years ago, I tried riding my bike down one of those, and found that it's not a good idea!! :) I read that a lot of the streets from the waterfront area to Washington Street used to be cobblestoned until the mid-1920's, when most of them were paved over. Evidently, the cobblestone streets were put there by the Hessian prisoners from the Battle of Saratoga. They didn't know what to do with the prisoners and they were cheap labor, so the British had these paid troops from Germany—Hessians —and they sent them down here, put them to work laying the streets of Alexandria. Interesting! Lots of history!
Posted by Char at 6:25 AM No comments: