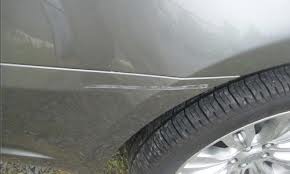 I was on my way to work this morning, coming along on First Street, near Rhode Island Avenue.  There was a line up of cars at near the light, and as the light changed, the cars slowly started up.  I was riding slowly along between the parked cars and the moving cars, when a silver compact car saw a open parking spot right about the time I was alongside the moving car (near the wheel well).  I saw the car slow a little and head towards the spot.  I hit my brakes, but the car kept going into the spot, while I was almost getting squished - - my left brake handle scraping along the car side!  Ack!!  The driver stopped momentarily and then finished pulling into the parking spot.  The lady driver behind this car pulled alongside me - her passenger window down and she asked if I was okay - she had seen what happened.  I said I was fine (just a little surprised).  The driver of the parked car came out (a Hispanic lady) and I think was as surprised as I was.  She hadn't seen me at all I think - and probably hadn't looked in her rearview mirror either - never expecting to have a bicyclist right next to her.   She asked a couple times if I was okay, and I said yes, and she opened the rear passenger door to get her young baby out to hand to her babysitter, who happened to be sitting on the nearby housesteps, and who had seen what happened too (and was equally surprised what happened).

I asked if her car was okay because I knew my brake lever had scraped her car.  She shut the rear door and then I saw a VERY LONG scrape along the car....ACK!  Oh no!  I felt bad, and I told her I had tried to stop in time.  She said it was okay, that it wasn't a new car, and it wasn't a problem.  I told her that I hoped she could get it buffed out alright.  She didn't seemed too concerned, but I still felt bad for the damage.  (The picture shown here is not her car - just a photo I found on the internet to represent a scrape).

I know there is the possibility of something like this happening when you ride between parked cars and moving cars - - or of car doors opening unexpectedly.   I guess I could avoid this type of thing happening if I just waited behind the line of cars.  The chances of an empty parking spot and a passing car coming along to park there at the same time you are passing, doesn't happen often.  There's usually enough room for me to pass slowly.  When I see that the passageway is REALLY tight, I get on the sidewalk and ride to the light, and get back into the lane (that's, of course, if the sidewalk isn't crowded at that area.  In this instance, the area may only have one or two pedestrians).  This area doesn't have bike lanes, but having bike lanes doesn't stop drivers from crossing it to get a parking spot.

What would you have done in this instance?