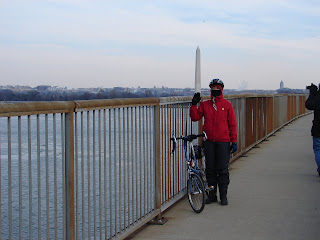 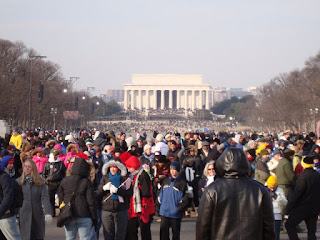 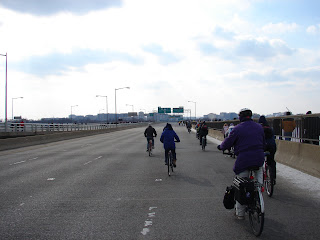 The BEST and EASIEST way to get to the Inauguration yesterday was by BIKE!!! :) My office was fortunately closed (everyone would have had a heck of time trying to get to the office anyway, with all the closed roads and clogged subway!). I told people in my office that I was going to bike into DC for the festivities. They looked at me like I was crazy! The bike ride was cold (temps in the 20's, wind chill about 10 degrees!), but you stayed warm biking. The Washington Area Bicyclist Association was hosting a couple of free bike valets, which I had planned on using (at the Jefferson Memorial). However, when I got there, I saw a long line to check your bike in, so I just decided to park and lock it at a chain/post area that runs along the Jefferson. Lots of people were doing that. You hope for the best, that no one would bother your bike.

Turns out I could have brought my bike even closer up on the Mall, which I didn't realize. But it worked out fine - a nice little walk to the Mall after biking, to stretch your legs. :)

The Inauguration was INCREDIBLE - it was like going to a huge rock concert with 1.8 million people cheering! :) :) Everyone was in a GREAT mood and we all got along amazingly well. There was Peace on Earth! A great way to start off the year! :)

After the Swearing-In Ceremony, biking home was fine. We biked right down the 14th Street Bridge, as it was closed to cars. And there were only a few people on the bike path, just like in the morning - so it was a piece of cake! Totally different than experiences people had when trying to take the subway!!