The Good and the Bad (Sad) News

The Good News is that there are some neat and clever bike posters up at bus stops in D.C. that I've come across. I don't know if they are also at bus stops in Virginia and Maryland, but it'd give people something to consider while waiting on the bus. 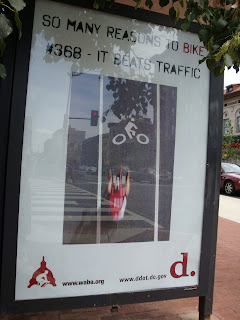 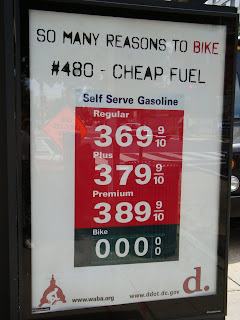 On the other hand, here's the bad (sad) news: 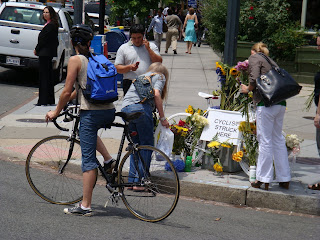 This past Tuesday morning, a 22-yr. old lady, Alice Swanson, was cycling the couple of miles from home to work in D.C., and approached an odd intersection, of R Street and 20th. A garbage truck traveling in the same direction approached that intersection. I believe Alice was attempting to continue onward, across busy Connecticut Avenue, the next intersection, a few feet away. But, unfortunately, the truck made a right turn onto 20th Street (which is a difficult turn to make in a car, let alone a truck!), and Alice Swanson was run over, and killed instantly. :( A Secret Service agent who was getting coffee right nearby, ran to pull her out from under the truck and administer CPR, but it was too late. Traffic was closed in that area for a couple of hours, as police conducted its investigation. The truck driver said he "never saw the bicyclist", as apparently, she was in his blind spot. But he would have had to pass her beforehand...didn't he see her then? There is a designated bike lane on R Street, that Alice was riding on. When bicycling, you tend to feel a little "safer" riding in bike lanes, but I don't think car drivers think that way, though they ought to. To them, perhaps it's just another set of white lines....

News articles about cyclists getting hurt or killed always grab my attention. I want to know when, where and what happened. I try to learn from this incident, and apply it to my own city commute. The fact is that Alice was attractive, vivacious, wanting to make a difference in the world, and could light up the room with her smile. It seemed such a shame to lose someone in the world like this. This tragic accident really affected cyclists in this area, and the Washington Area Bicyclist Association put up a "ghost bicycle" by the intersection where she was killed. They held a press conference and a dedication for "ghost bicycle" in Alice's name. Friends and co-workers of Alice, and bicyclists who didn't even know her, came and tearfully said their goodbyes and left flowers. I don't think anyone will forget Alice and what happened that day... Hopefully drivers and bicyclists will learn from it and be careful where they travel. I know I have.
Posted by Char at 8:37 AM No comments: