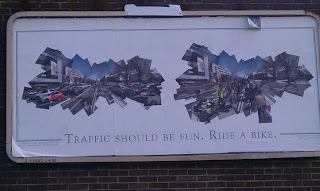 On my bike ride home recently, I was waiting at a light, and was looking around and saw this billboard on the side of a building. :)  I went online afterwards to find out some information about this billboard.  Evidently, in June of this year, the DC Dept. of Transportation awarded a grant to the Washington Area Bicyclist Association to depict a visual street space that shows how much space is gained if more people rode bikes or walked, instead of driving.

It's a little difficult to see the images in the graphics, but the left image shows gridlock traffic on Pennsylvania Avenue.  There are bike lanes sandwiched in the middle, with no bicyclists in them.  The image on the right shows the same scene, but with bicyclists in the bike lane, and NO traffic around them.  I guess it shows the way it Pennsylvania Avenue would look if people rode their bikes to work, instead of their cars.  Car traffic = NO FUN.  Bicycle traffic = FUN. :)  If you ever seen or participated in a good-size gathering of bicyclists, you can see they are happy and having FUN.  It's TOTALLY OPPOSITE when you get a good size gathering (i.e., traffic jam!) of cars.  You aren't moving, you are gonna be late, people don't let you in to merge, etc.

With Thanksgiving weekend coming up, I felt the vibe of the traffic change - - people were zooming around, getting gas, running last-minute errands before they headed out of town, etc.  My bicycle commute stayed the same - - nice and easy-going, no need to rush, and in fact, it was even more pleasant because today, the day before Thanksgiving, there were even LESS cars on the road - - it was more quiet.  Cars and traffic make a lot of noise.  So I am thankful for a quiet and peaceful commute.