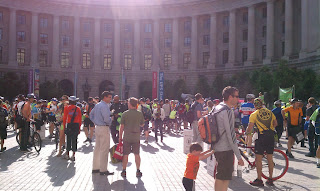 It was beautiful weather for Bike To Work Day today. :) I had registered to pick up my ride t-shirt at the pit-stop located at a park a couple blocks from my house. When I got to the park entrance though, I didn't see any banner or sign, showing that there was a Bike To Work Day pit-stop. While I was looking for any signs, I wasn't looking where I was going and my tire rubbed up against the curb and I lost my balance and went down. :/ Fortunately, I was near a standstill at the time, so it was more of a slow-motion easy fall and I wasn't hurt...more embarrassed than anything. :) I was hoping no one had really seen that lovely stunt....however, a lady and her young son (who was on the child seat) came along at that moment, and asked if I was okay, which was nice of them. I mentioned the need for some kind of signs for the Bike To Work event, and she agreed. It was a good thing she showed me where the tables were, because I wouldn't have seen them easily -- they were located behind a building! You would think they would be in front of the building, more visible to both bicyclists and cars. There were only a handful or two of people there and not much of an offering of food, drink, or publications. Since I'm new to the area, I'm not sure if this was a "normal" amount of attendees or not.

Soon after I got there, a guy announced that he would be leading a convoy into DC to go to the main rally location. I decided to join them (only 4 other cyclists). They took a similar route that I took to work, however, they hopped onto the Metropolitan Branch Trail instead of city streets. It's been a while since I've been on this trail, due to a couple of reasons. One main reason is that there have been some incidents in the past (robberies/assaults). I'd rather take my chances with city streets. :) The trail is a little isolated, and not many people ride it, so I guess there is more incentives to attack someone and get away with it. The other reason is that the trail takes me in a direction further from my office instead of closer. So, the time you save in zipping along the trail and not having stoplights/stop signs, you lose in having to come back across town to get to my office (and getting caught in more traffic). So I think I'll stick with my current route.

When we arrived near the location of the main rally, the convoy turned left into a courtyard area at Ronald Reagan International Center. Usually, the rally has been held at Freedom Plaza. But evidently the Occupy Movement group is still occupying that spot. As we made our way through the crosswalk for the rally location, there was a kind of loud, large group of protesters right next to it -- I'm not sure what they were protesting - but it was in another language.

At the rally location, there weren't as many people present as I have seen in the past - - maybe we arrived a little on the later side, or maybe people didn't know about this new location. Or maybe there WERE the same amount of people, but the location was more open, so people had more room to move about. :) There were a couple of short speeches given, and music was being played. There were a handful of booths set up (I think there are usually more?), and food, drink and t-shirts were being given away. As I was munching on my bagel, a lady came up to interview me who said she had some sort of company email newsletter she sent out, and wanted to ask me a few questions about Bike to Work Day. After I talked to her for a few minutes, I turned around and someone called my name - it was a guy I knew from a bike club I used to head up (DC Bike Friday Club), so it was good to see him, as it's been a number of years. :) As I turned to leave to head out to get to my office, I realized that I had a flat in the rear tire! :/ Bummer. I'm wondering if it's glass that I ran over on that trail...? So I quickly put in a new inner tube and was on my way - although a little late to work. At least I didn't have any traffic to hold me up. :)
Posted by Char at 11:31 AM No comments: