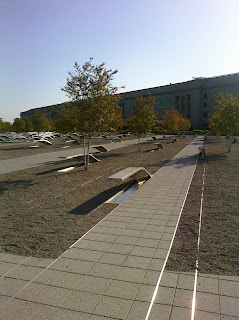 This past weekend, I went on a group ride, and discovered a bike path that I didn't know about. It went by the Pentagon Memorial and then linked up with the Memorial Bridge. I was excited to try the route to work this morning, to see if it would cut the mileage on my commute. I was pretty surprised to see that it did - by several miles! :) :) Wish I had known about it before!

I had been wanting to see the Pentagon Memorial, but just hadn't taken the time to locate it. It's a nice and peaceful memorial to those who lost their lives in the 911 Pentagon plane crash... Under each bench "wing" is a pool of running water which is lit at night. In reading online about the memorial, each bench wing has the name of the victim. When reading the name on the bench, if the victim was on the plane, the name faces the sky; if the victim was in the Pentagon, the view faces the Pentagon. The benches are also arranged according to the victims ages, youngest to oldest. 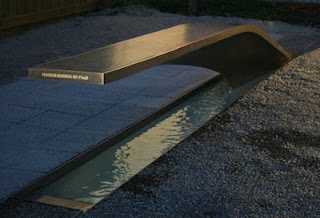 I remember on 911, biking to my home in Falls Church, crossing the Key Bridge, and seeing smoke rising from the Pentagon in the distance....it's something I will never forget. This Memorial is definitely a touching way to remember the 184 people who lost their lives that day....

So, though this new commute route is shorter, it does have a negative aspect in that it crosses a number of busy highways... I will have to pay extra attention to the traffic and make sure it's safe to cross. The good thing is that there are a number of cyclists who ride this route, and I can hopefully cross with one or two cyclists so that there is safety in numbers. :) And speaking of numbers, the new route shaved about 10 minutes off of my commute time! :)
Posted by Char at 6:31 AM 4 comments: