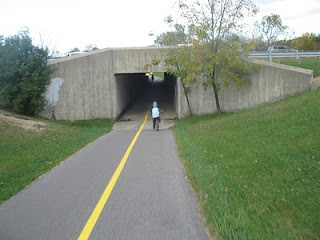 On my commuting route, there's a part where the path goes through a short curved tunnel, underneath a railroad line (like this picture). The path leading down into the tunnel is fairly steep, and there is a speed limit sign posted right next to the entrance of the tunnel, stating 5 m.p.h.
I doubt anyone goes that speed through there, especially coming down that steep hill. Since both sides of the tunnel are blind entrances, I always ring my bell as I come down the hill (with hands on brakes), just in case someone comes tearing through the tunnel the opposite way (as some people do, to try and get a jump on coming up the steep hill).

Anyway, as I approach the other side of the tunnel, there's a lady jogger ahead of me. We enter the tunnel, and as we do, I hear some kids yelling "Oh - - WHOA!!!" and whooping and hollering, sounding like they were coming down that steep hill. As the lady jogger and I came through the tunnel, I looked up and saw two kids riding piggyback on a BMX bike, tearing down the hill towards us. The kid piloting the bike goes off the path a bit and onto the grass, but then veers back onto the path at nearly the last second. Good thing, otherwise they would have SLAMMED into the outside part of the tunnel wall...and NEITHER had a helmet on. We turned and watched them fly into the tunnel on the wrong side of the tunnel (thank God there wasn't another cyclist or jogger coming through there!). They got a few feet along but then hit the side of the tunnel wall, their bodies scraping along til they managed to stop. Ouch!!

The lady jogger and I just looked at each other and she said, "KIDS!!!" :) ha. Yea, the things you do as a kid! :) We were both amazed that they didn't really have a serious accident!
Posted by Char at 10:41 AM No comments: