On Tuesday afternoon, I checked my e-mail and was surprised to see an e-mail from a reporter from Fox 5 News! He said he had seen my Living Car-Free blog, and wanted to come and interview me! I was skeptical at first - I mean, anyone can send an e-mail like that...it looked official, but how can you be sure? I called the business number he listed and left a message, and then called his cell phone. He answered, and we spoke a little while - they wanted to come by my office after I got off work (within an hour!). I said alright - - I figured I'd know it was the "real thing" if they showed up in a news truck. :) However, they didn't - they evidently were in a car, and parked nearby, so they walked up to the building. But when I saw the big video camera, I guess I was convinced then! :)
They spent the next hour or two, filming me in and outside the office, then strapped on a small video camera to my bike and filmed my commute home - while they drove to my house to meet me and videotape me pulling up in the driveway. :) So it was an interesting way to spend an evening! :) Enjoy the video! :)
http://www.myfoxdc.com/myfox/pages/ContentDetail?contentId=5506029
Maybe it'll get some people interested in taking up biking when Spring rolls around!
We got an e-mail at work today saying that the parking rates for our office building will be going up to $250 a month!! Wow! How do people afford that?? That's like $3000 a year!! You could buy a REAL nice bike for that!!! :)
Posted by Char at 8:02 AM 1 comment:

Singing in the Rain! 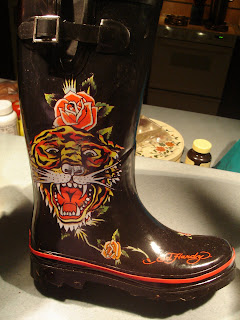 One thing that has sort of "plagued" my bike commute, especially in the Fall and Winter, is trying to keep my feet warm and dry when it rains. It's not a problem in the Summer - I wear Keen sandals, and the warm water runs through them, and it feels good. Cold rain, however, isn't as nice. I have bought various types of rain boots, some high-tech and expensive, but the problem persists. Even though the boots SAY they are waterproof or water-resistant. What I have discovered is that I needed to have boots that are tall - that reach up to my knees. The reason being that, if the boots are mid-length, my rain pants don't cover over the tops of the boots when I ride, and rain gets into the boots. Plus, the material NEEDS to be RUBBER, which is totally waterproof.
Last night, I stopped by Nordstroms to check on some rain boots I saw on their website. It said the height of the boot was 13". I thought that might be high enough...but when I saw the boots in person, I decided they wouldn't be tall enough. Near these boots were knee-high rubber rain boots. They were kind of wild, because they have a Chinese tiger painted on both sides of the boots. But my rain pants would cover that - not that I minded, as I like tigers. :) They fit, and I wore them out of the store.
I got about halfway home, and it started to rain heavily. I cycled along, mentally checking to see if everything stayed dry and NO water leaked in. Ahhh......results AT LAST!!! :) Though my feet were a little cold (even though I had toe warmers on), I figured I could wear two pairs of socks the next time, and see if that helped. Anyway, I was singing in the rain on my ride home, very happy that finally I found boots that worked! I should have gotten boots like this a long time ago...but we live and learn! :)
Posted by Char at 6:55 AM No comments: