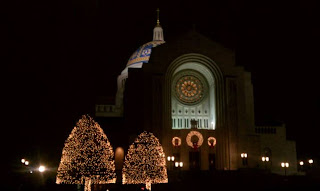 Every day I pass by the Bascilia of the National Shrine. Evidently, it's the largest Catholic church in America. I've been in it and it is beautiful. At night, when I ride by, they've put up Christmas lights all around, and I've been wanting to stop to take a picture of it, so tonight I did. It's so nicely done. :) I ride by other nice Christmas decorations on various homes along the way, and enjoy them too. It's one of the enjoyments of biking in the wintertime. :) Some people wonder how can I bike in the cold - but you do warm up and don't even hardly notice the cold, especially when you have pretty sights like this to see along the way. :)
Posted by Char at 4:56 PM 1 comment:

The Beauty of the Bike :) 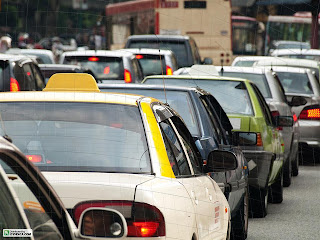 Yesterday morning as I was about 3 or so blocks from my office, I noticed A LOT of traffic jammed on 19th Street. It's a busy street, but not THIS busy! I mean, it was like a traffic jam we have when it snows - - except there wasn't any snow. People were trying get around it by turning off other streets, but the choices are few because of the one-way streets.

So, I skinnied on through the traffic on my bike, and came up on 19th & L, where there were police cars blocking off the whole block over to 18th. So, that's what the problem was - except that I didn't see any problem - - just an empty block. When I got to work (on time) a couple minutes later, I checked my computer for news of any situation at that location, and it said that there had been a serious accident. (I never found out what exactly happened).

My boss, along with several people in my office, were a half hour or more late getting to work because of the jam...but, as I said, the beauty of the bike is that you can get by these situations...whether it's a tree across a road, traffic jam, road closures, etc. The bike saves the day! :)
Posted by Char at 4:31 AM 3 comments: